On another note, to cross-compile a Linux system with Qtopia and some apps, is devkitARM OK, or do folks use other cross-compile chains?

by killerasus
Got this one today too. The path was overwritten instead of appending devkitpro directory.

My system is the same as the original poster: Windows 7 64-bit.

by WinterMute
Sorry about the path issue - unfortunately I'm really not sure how that happened. I've updated the installer so it will abort the path setting and warn if it attempts to set a blank path. Could you give the new one a shot & see what happens? The current updater will download the new one when you run it and it's probably best to backup your current path just in case.

devkitARM is a baremetal toolchain which uses newlib to provide libc so it's not really suitable for building linux apps. You'll need an arm-none-linux-gnueabi toolchain, the CodeSourcery tools are popular. http://www.mentor.com/embedded-software ... e-edition/

by killerasus
Well, installing it from 1.5.1 I got an "update=0" message at the end and still the path was overwritten for devkitPro's bin directory, though this time I had the path backed up.

Is there a limit in the installer for the path string length, or is it just overwriting instead of appending to the end?

by WinterMute
It's supposed to prepend the path, there's some logic in the installer to remove the old path to msys and reinsert it at the beginning. There have been some problems with the tools if the system path contains paths with spaces before the msys/bin directory. I'll dig out a win7 machine and see if I can figure out what's going wrong.

by killerasus
I tested in a Win 7 32-bit system and it worked as expected. The problem is just with 64-bit systems.

by WinterMute
What version did you end up testing with? I uploaded another update (1.5.3) earlier.

The earlier versions of the installer worked fine on every 64bit windows 7 machine I've been able to find, it's definitely not related to that. Try 1.5.3 and see if that works - while you're testing could you let me know the length (in bytes) of your PATH on the machine where it's been failing.

by Izhido
Hm. Could it probably be some incompatibility issue, corrected maybe with Service Pack 1 ?

by killerasus
Trying again, now with version 1.5.3, removing the path added by version 1.5.1. For the record, I'm using a Windows 7 Professional SP1 64-bit. Before installing, it's length is 1480 characters. 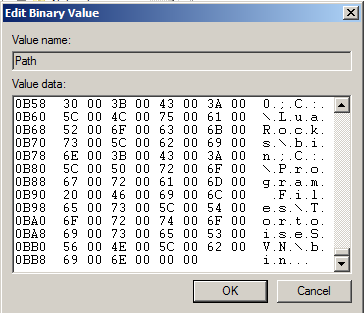